Our System of Government

While the Prime Minister and the premiers of Canada's provinces are heads of government, Her Majesty Queen Elizabeth II is Canada's formal head of state. This is in contrast to the system of government in the United States, where the president is head of both government and state.

In the Canadian Constitution, government is declared "to continue and be vested in the Queen." The Saskatchewan legislature consists of the Legislative Assembly and the Queen, or the Lieutenant Governor who ordinarily represents the Queen.

It is significant that the Lieutenant Governor has the power to dissolve or dismiss a legislature. Our Constitution was intentionally framed to place the supreme power of state with the Crown, beyond control of the partisan political process. Symbolically, every Act is passed by the Legislative Assembly in the name of the Queen. In principle, the Crown is the custodian of our Constitution and the guarantor of our democratic rights and can, in exceptional circumstances, protect the Legislative Assembly and the people from abuse of power. It is important to remember that although governments exercise power, they do not possess it; power is given by the Crown only temporarily and in trust, and can be revoked if abused.

The fundamental democratic principle that gives life to our Legislative Assembly is responsible government, meaning that government must answer for its actions to a legislature of members elected by the people.

The concept of responsible government evolved over time. Originally, the cabinet was composed of people who did not hold seats in the legislature. After it was decided that government needed parliamentary approval for its actions, it became obvious that cabinet ought to have membership in parliament to better carry on the Sovereign's business. While cabinet's purpose was to control government policy and find and maintain support, its closer relationship with parliament provided a direct opportunity for members to scrutinize, question and publicize government’s actions.

The crucial feature of this interaction between government and parliament was that cabinet could be defeated by a majority decision of the Assembly. Today, when a cabinet loses the confidence of the Assembly, it is usual that the people be given an opportunity to elect a new Assembly and government.

The Saskatchewan government is made up of three branches: the executive, the legislative and the judiciary. All of these components are linked through the Crown, which is the head of state.

The executive arm consists of the Premier, who is the President of the Executive Council and head of government with control over cabinet and the civil service.

The legislative arm consists of the Speaker, who is the Assembly's presiding officer, and the elected members, who are served by the Clerk, the Officers of the Legislative Assembly, and the employees of the legislative service.

The judicial arm consists of the Chief Justice and the judges who preside over the courts. 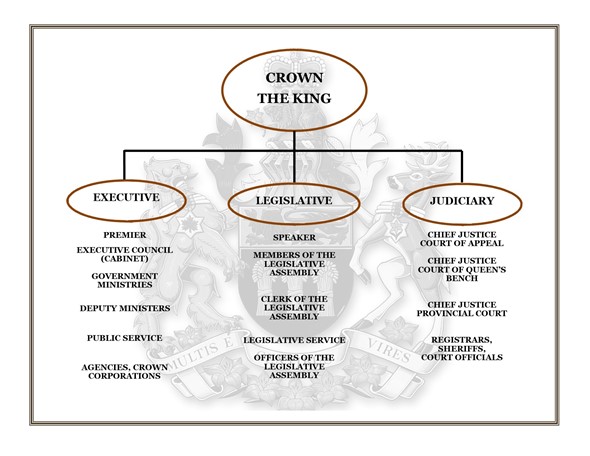 Most importantly, the Government of Saskatchewan has authority over direct taxation for provincial purposes; natural resources; health; local works; property and civil rights in the province; and administration of justice, education, and municipal and rural affairs. Through agreements with the federal government, administration of a wide variety of matters is shared.